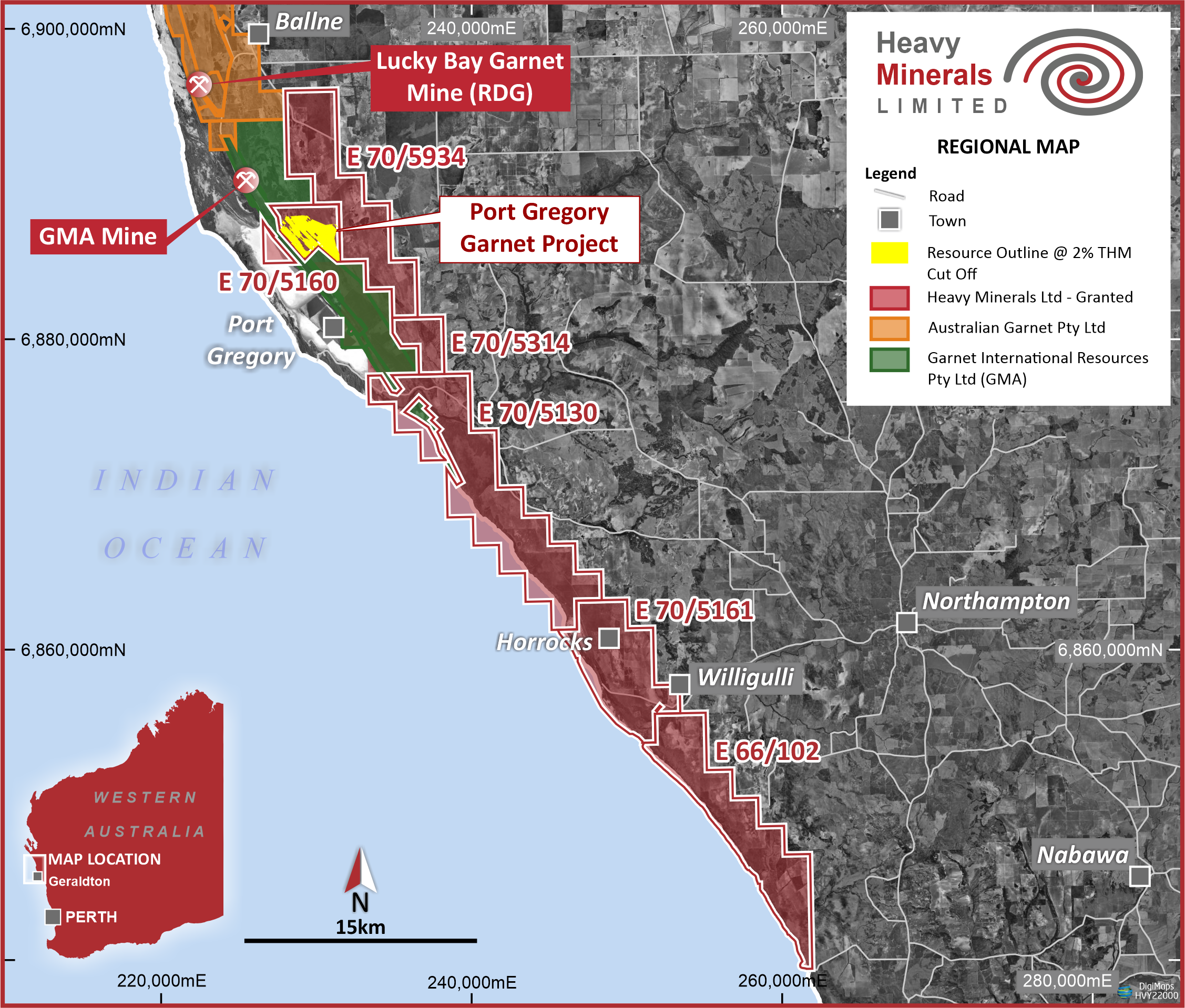 Overview
The Port Gregory Garnet Project is a 226 sq km Western Australian tenement package 100% owned by Heavy Minerals Limited. The project contains a JORC Compliant Mineral Resource estimate of 135 Mt @ 4.0% (THM) with 4.9 Mt of Contained Garnet.
The Company’s recently completed Scoping Study demonstrates the potential for a 16 year mine life project having a net present value (NPV) of $253 million and a capital cost of $110 million.

Location
The Port Gregory Garnet Project is in the established mineralogical terrain of the Hutt River Garnet area within the Shire of Northampton in the mid-west coastal region of Western Australia.
It is situated approximately 45-60 km north of Geraldton, 45-65 km south of Kalbarri, and 40 km north-west from Northampton.

Geology
The tenements are located over an area of heavy mineral deposits in Western Australia which are ultimately, but indirectly, derived from the weathering of crystalline igneous rocks in the Archean Yilgarn Block. Heavy mineral grains derived from the Yilgarn Block were initially deposited in thick sequences of Mesozoic sediments that filled the Perth Basin. The tenement area lies in the most northerly part of the Perth Basin, on the western side of the Northampton Block.
The Tamala Limestone, a belt of coastal limestone extends up to 8.0 km inland. It is composed of eolianite, which accumulated originally as coastal sand dunes in the late Pleistocene. This has developed over a basement of late Cretaceous age Winning Group sediments which can be seen outcropping near Yanganooka Well. A number of erosional scarps have been developed on the seaward side of the Tamala Limestone, one of which is equivalent to the strand-line mineralisation to the south. Fossil crescent dunes can also be distinguished on top of the large massive limestone area which may be of early Pleistocene age.
The sands contain significant localised enrichments of heavy minerals, notably garnet (almandine variety) and to a lesser extent ilmenite. The heavy minerals are thought to be derived from garnet-bearing Precambrian Granulites and migmatites of the Northampton Shield. The sands appear to have been deposited when the sea level was about 6m higher than today, possibly during the last interglacial peak.

Exploration Program
Heavy Minerals will commence both in-fill and extension drilling at the Port Gregory Project in the third quarter of 2022.

PROSPECTUS NOTICE AND ACCESS TERMS By accessing this site you agree to and acknowledge that you have read and accept these terms and conditions of access. Heavy Minerals Limited ACN xxx xxx xxx (Company) has lodged a prospectus dated x May 2021 (Prospectus) with the Australian Securities and Investments Commission (ASIC) in relation to (inter alia) the offer of a minimum of xx,xxx,xxx fully paid ordinary shares (Shares) to be issued at a price of $0.20 per Share to raise a minimum of $5,500,000 (before costs) (Public Offer). You may print out a hard copy of the Prospectus from this website or copy the electronic Prospectus on this website into an electronic file for your personal use only. You must not alter the contents of this electronic file in any way. Neither ASIC nor ASX Limited, nor any of their officers, take any responsibility for the contents of the Prospectus. The Company is not liable for any loss incurred from relying on this site, including from data corruption on download. The information on this page is not part of the Prospectus. IMPORTANT NOTICES Applications Anyone who wants to acquire securities in the Company will need to carefully consider the Prospectus and complete an application form attached to or accompanying the Prospectus. Paper copies of the Prospectus and application forms are available free of charge during the period of the Public Offer by contacting the Company. If you request a copy of the Prospectus and an application form you are not obliged to apply for securities. The Corporations Act 2001 (Cth) prohibits any person from passing on to another person an application form unless it is attached to or accompanied by a complete and unaltered version of a prospectus. The Company will not accept a completed application form if it has reason to believe that the Applicant has not received a complete and unaltered copy of the Prospectus. Persons to whom offer is available For legal reasons, the electronic version of the Prospectus accessible through this website is available to persons accessing this website from within Australia only. If you are accessing this website from anywhere outside Australia, please do not download the electronic version of the Prospectus. The Prospectus does not constitute an offer or an invitation in any jurisdiction in which, or to any person to whom, it would not be lawful to make such an offer or invitation. The distribution of the Prospectus in jurisdictions outside Australia may be restricted by law and persons who come into possession of the Prospectus should seek advice on and observe any of these restrictions. Failure to comply with these restrictions may violate securities laws. Applicants who are resident in countries other than Australia should consult their professional advisers as to whether any governmental or other consent are required or whether any other formalities need to be considered and followed. No advice included Nothing contained on this website or in the Prospectus constitutes financial, investment, legal, business, tax or other advice. In particular, the information on this website and in the Prospectus does not take into account your investment objectives, financial situation or particular needs. In making an investment decision, you must rely on your own examination of the Prospectus, including the merits and risks involved. You should consult your professional adviser for financial, legal, business or tax advice. The Prospectus is an important document that should be read by prospective investors in its entirety before deciding whether to participate. If after reading the Prospectus you have questions, you should contact your stockbroker, accountant, financial, legal or other professional advisers. By clicking "I Accept" below, you acknowledge that: • You have read and understood the above statements; • You are an Australian resident and you are requesting a copy of the Prospectus from within Australia; and • You will not pass on to any other person the application form unless it is attached to or accompanied by the complete and unaltered electronic Prospectus.