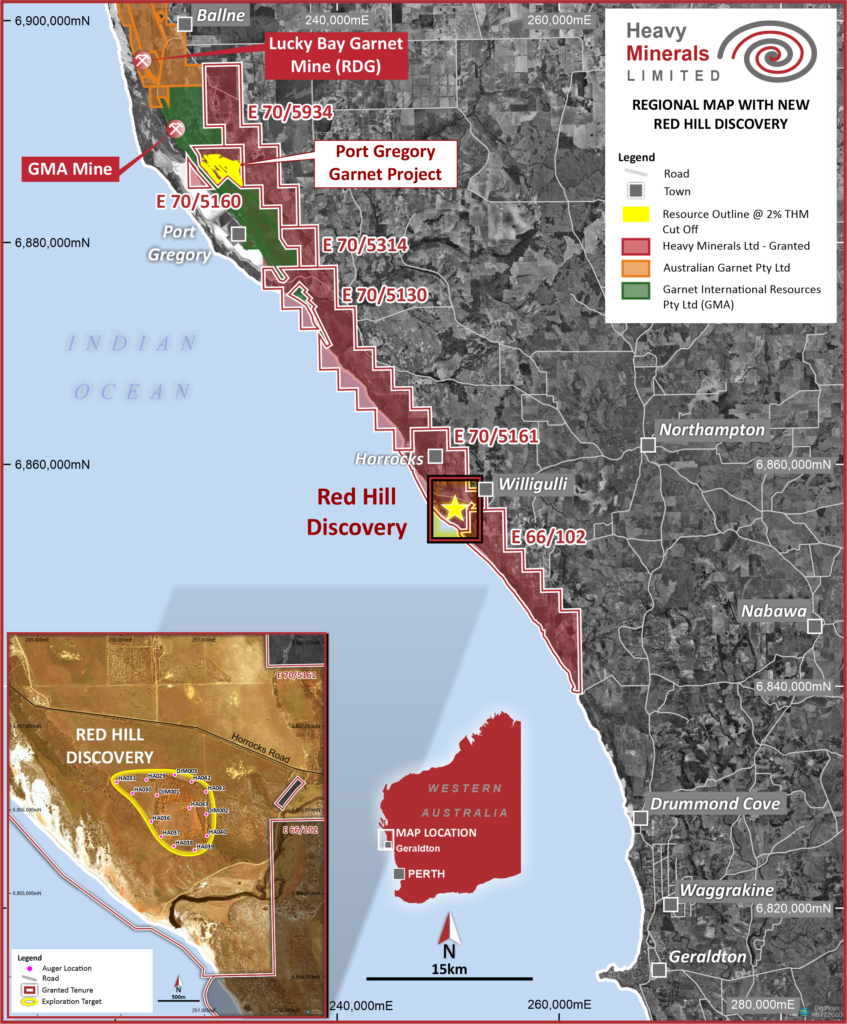 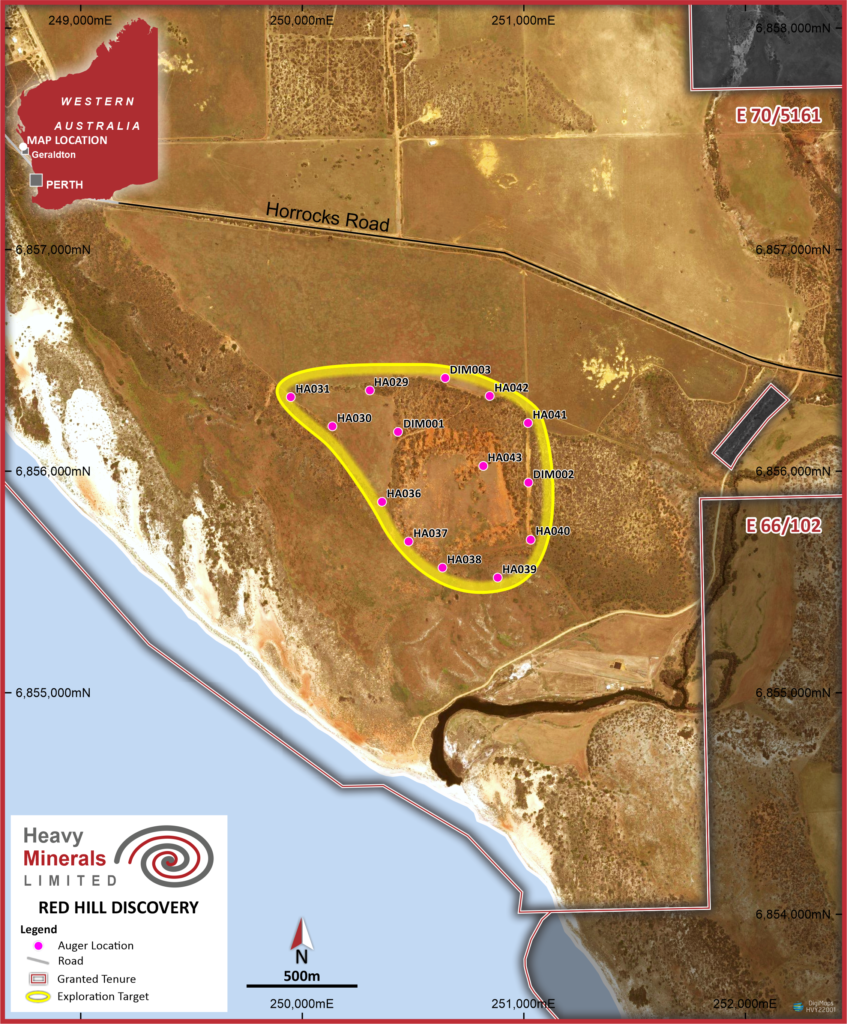 Overview
The Red Hill Prospect is an exciting recent discovery for Heavy Minerals Limited with shallow high grade garnet being observed over a 1 km x 1 km area. The company believes this could be a significant resource in the near term.

Location
The Red Hill Prospect is approximately 37 km South of the Port Gregory Garnet Project and approximately 70 km by road to the Port of Geraldton.

Given the proximity to Geraldton Port (approximately half the distance to Port compared to the RDG Lucky Bay Mine) any potential future operation here could have an advantage compared to similar operations in the region, due to lower transport costs.

Geology
The Geology at the prospect is analogous to the Port Gregory project with dunal sands overlying the Tamala Limestone formation. The frontal dunes and beaches in this area of the coastline have anomalous levels of very coarse garnet. This garnet has likely been washed down by the Bowes River from source rocks further inland. The target sand packages on the eastern side of the foredune area are also aeolian in nature and considered by the HVY team to be analogous to the sand packages hosting the identified mineralisation at the Port Gregory Project.

Exploration Program
The high grade, shallow mineralisation intercepted in the recent auger campaign has elevated this prospect to a priority exploration target, with follow up drilling planned for 2022 to firm up the discovery.

PROSPECTUS NOTICE AND ACCESS TERMS By accessing this site you agree to and acknowledge that you have read and accept these terms and conditions of access. Heavy Minerals Limited ACN xxx xxx xxx (Company) has lodged a prospectus dated x May 2021 (Prospectus) with the Australian Securities and Investments Commission (ASIC) in relation to (inter alia) the offer of a minimum of xx,xxx,xxx fully paid ordinary shares (Shares) to be issued at a price of $0.20 per Share to raise a minimum of $5,500,000 (before costs) (Public Offer). You may print out a hard copy of the Prospectus from this website or copy the electronic Prospectus on this website into an electronic file for your personal use only. You must not alter the contents of this electronic file in any way. Neither ASIC nor ASX Limited, nor any of their officers, take any responsibility for the contents of the Prospectus. The Company is not liable for any loss incurred from relying on this site, including from data corruption on download. The information on this page is not part of the Prospectus. IMPORTANT NOTICES Applications Anyone who wants to acquire securities in the Company will need to carefully consider the Prospectus and complete an application form attached to or accompanying the Prospectus. Paper copies of the Prospectus and application forms are available free of charge during the period of the Public Offer by contacting the Company. If you request a copy of the Prospectus and an application form you are not obliged to apply for securities. The Corporations Act 2001 (Cth) prohibits any person from passing on to another person an application form unless it is attached to or accompanied by a complete and unaltered version of a prospectus. The Company will not accept a completed application form if it has reason to believe that the Applicant has not received a complete and unaltered copy of the Prospectus. Persons to whom offer is available For legal reasons, the electronic version of the Prospectus accessible through this website is available to persons accessing this website from within Australia only. If you are accessing this website from anywhere outside Australia, please do not download the electronic version of the Prospectus. The Prospectus does not constitute an offer or an invitation in any jurisdiction in which, or to any person to whom, it would not be lawful to make such an offer or invitation. The distribution of the Prospectus in jurisdictions outside Australia may be restricted by law and persons who come into possession of the Prospectus should seek advice on and observe any of these restrictions. Failure to comply with these restrictions may violate securities laws. Applicants who are resident in countries other than Australia should consult their professional advisers as to whether any governmental or other consent are required or whether any other formalities need to be considered and followed. No advice included Nothing contained on this website or in the Prospectus constitutes financial, investment, legal, business, tax or other advice. In particular, the information on this website and in the Prospectus does not take into account your investment objectives, financial situation or particular needs. In making an investment decision, you must rely on your own examination of the Prospectus, including the merits and risks involved. You should consult your professional adviser for financial, legal, business or tax advice. The Prospectus is an important document that should be read by prospective investors in its entirety before deciding whether to participate. If after reading the Prospectus you have questions, you should contact your stockbroker, accountant, financial, legal or other professional advisers. By clicking "I Accept" below, you acknowledge that: • You have read and understood the above statements; • You are an Australian resident and you are requesting a copy of the Prospectus from within Australia; and • You will not pass on to any other person the application form unless it is attached to or accompanied by the complete and unaltered electronic Prospectus.